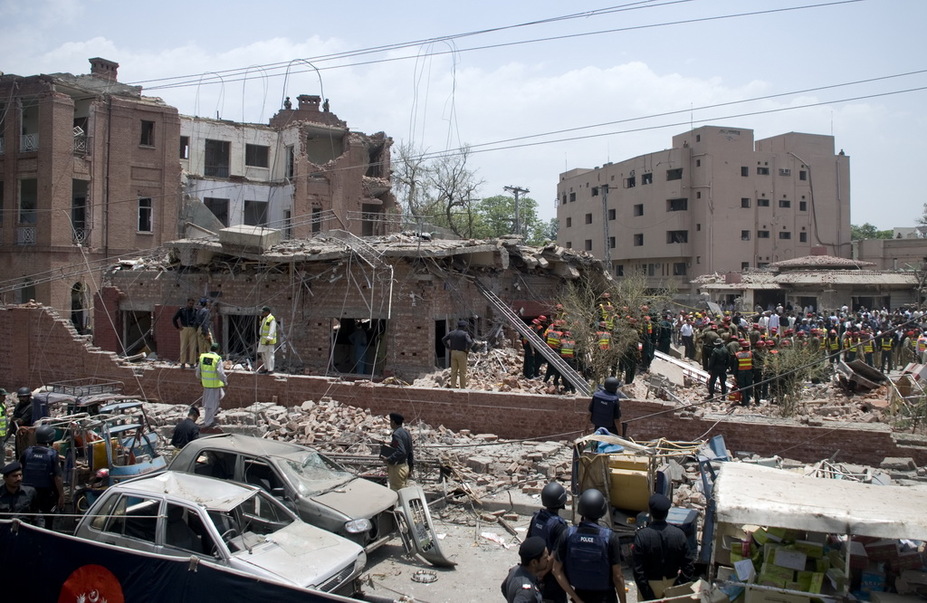 LAHORE: The suicide car bomb blast at Rescue-15 building adjacent to CCPO Office killed 23 people and injured over 300 others here in Civil Line area on Wednesday.
The injured have been shifted to different hospitals of the city where medical aid is being provided to them.
According to sources, gunshots were being heard near the blast site for minutes before a speeding red van laden with explosives broke the barriers outside the Rescue-15 building and blew up with a loud blast, bringing down the entire building.
The suicide bomber intended to target the office of the CCPO, sources added.
Explosives weighing 100 kilograms were used in the explosion which was followed by gunshots in the area with intervals while four suspects were arrested from the blast site.
Windowpanes of the nearby buildings and houses were shattered and 15 vehicles were destroyed as thick smoke clouded the blast site.
Rescue activities were kick-started after the blast and the injured were whisked away by ambulances to Mayo, Gangaram and Services hospitals.
Machines are being used to recover people trapped under the debris. Six of the ten bodies brought to Meo Hospital were of policemen while two bodies are beyond recognition.

ISLAMABAD: Tehreek-e-Taliban Pakistan (TTP) claimed responsibility for the suicide bombing on rescue 15 police building that killed 24 people, a US specialist Islamist monitoring group said.
A group calling itself "Tehrik-i-Taliban Pakistan (TTP)" made the claim in a Turkish-language statement posted on Turkish jihadist websites through an organisation called Elif Media.
The Islamist monitors SITE cited the group as saying the attack "targeted the 'nest of evil' in Lahore, and was a 'humble gift' to the mujahideen who suffer beneath the attacks of Pakistani forces in Swat."
It specified that a vehicle laden with 100 kilos of explosives was blown up outside a security building in Lahore, the capital of Punjab province in Pakistan, destroying the building and injuring hundreds more.
"TTP asks Muslims in Pakistan to stay away from areas where the enemy is 'taking advantage' of them, so that they are not harmed by jihadi attacks," SITE added. The blast was the third deadly attack to rock the country's liberal cultural capital in as many months.
A top security official told media after nightfall that 24 people died, including 13 policemen, civilians and security officers.
A senior investigator told media the attack was the likely handiwork of Al-Qaeda linked Taliban militants operating from Pakistan's wild Waziristan, which borders Afghanistan.
One of the attackers was shot dead by security guards as he approached the building, and two others perished in the explosion, the investigator said.
Pakistan's military has been locked in a month-long offensive against Taliban militants in the northwest, which the authorities say has killed about 1,200 extremists and sent 2.4 million people fleeing their homes.
The suicide car bomb blast at Rescue-15 building adjacent to CCPO Office killed 23 people and injured over 300 others here in Civil Line area. Lahore.