When the levee breaks... 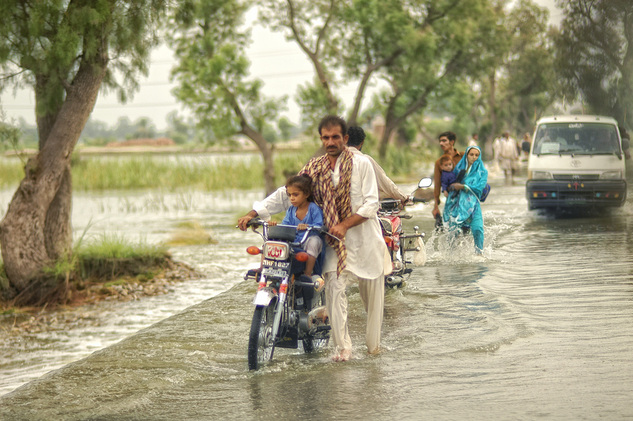 Adrift and nobody to help but themselves... Photo: Saad Sarfraz Sheikh

Beads of sweat drip down Irfanullah's face as he clutches the weak branches of a date tree. It seems to be a safe place to settle into until Mother Nature's rampage runs its course…

Barely an hour ago, the local mosque had warned them of the surging water, forcing Irfanullah to send his children to a distant village. He had later returned to his flooded house, which was already giving up to the might of the water. The walls were the first to go, as every brick disappeared into the rising water.

Stuffing whatever he had into his crimson salwar kameez, he climbed the tallest tree to save his life. He spent the entire night there, rattled, kicking off desperate snakes, only able to escape when people on a rubber raft spotted him the next morning.

Unlike victims in the neighbouring province of Khyber Pakhtunkhwa who were caught unaware, Irfanullah was atleast ‘ warned' in advance about the floods in his village of Daira Din Pannah, one of the hardest-hit flood areas in Punjab.

In South Punjab, displaced villagers litter and foment the horizon. They sit with whatever they have, under rain or sunshine, aligning their charpoys and covering them with clothes to use as shelter. Their expectant eyes trace the smoky trail of relief trucks, as they fade away, only to be absorbed by the mirage of disaster mismanagement.

There have been reports of those affected forcibly climbing trucks in their hope to grab mere morsels. Relief teams are forced to push them off the edge of the truck, as the majority among them are ‘ professionals', people posing as victims of the flood. They are mostly labourers, joining the flood victims for food and other relief, depriving them of their deserving share.

Farooq, a labourer, defends himself by saying that if he can get all the basic necessities for his family by lining up, then there is absolutely no need to toil under the ruthless sun all day. Convenient indeed!

Pakistan's 63rd anniversary was a true tribute to Partition, as its imagery was everywhere. Families were seen fleeing for safer areas with their livestock, carrying whatever they had. Naked children ran after their mothers, who followed their husbands shepherding their surviving livestock. Their loss of loved ones, homes, possessions, farms, livestock, livelihoods, and businesses has made them lose their remaining faith in the government as they were left on their own.

“We haven't seen, or heard from, or been helped by the government,” says Khadim Hussain, a 27-year-old truck driver, while pointing to a large body of water. He says his house and all his possessions rest somewhere under the water. “We don't expect any official help,” he adds.

A million cows and buffaloes drowned, unable to escape as their owners had forgotten to free them while fleeing. The military was seen justifying the defence budget by using its machinery while rescuing, but the government was nowhere in sight.

Visitors are disheartened not to see a single government relief truck or activity in the affected areas, and wonder where the government is at such a critical time. “We have nothing, nothing,” says Irfanullah. “And no one to help us.”

Facebook statuses of many Pakistanis proclaim, “Don't donate to any Government funds! Go for NGOs!” Now there's reluctance as even people in Pakistan are not giving generously to this flood fund because they're not too sure the money will be spent honestly.

The lack of a strong government response to a national disaster has allowed banned Islamist groups to fill in the vacuum, who are seen flaunting their flags at different camps. This could resonate with desperate people living on the edge and draw them closer to the militants.

A militant-plagued Khyber Pakhtunkhwa is now a psychological and emotional testing ground for both the local militants and American forces, each trying to carve out niches in the hearts and minds of people. While the Americans are seen as only trying to improve their image, the militants are sharpening potential recruits for future militant attacks.

The international media has also questioned the ‘credibility' of the unpopular Pakistani government, and, adding insult to injury, it is now singing tales of eternal state collapse and “final nail in the coffin” stories. Such reportage has affected the flow of aid badly, as instead of genuinely making the world feel sorry, the media is extracting hate and disgust.

This month the world finally woke up to the devastation and Indian aid worth $5 million was accepted by Pakistan. But this still needs to be stepped up. India is strategically the only country that can really help Pakistan, as it is in its interest to have a stable Pakistan that is free from terrorism, allowing good relations and a platform to resolve long standing issues.

Pakistanis can make use of low-priced and quality Indian commodities, eliminating the need to import low grade Chinese and costly European products.

It may seem like a distant dream, but if 80 per cent of the trucks in Pakistan run on smuggled Indian tyres, then a peaceful Indo-Pak synergy will be beneficial for both. Fuel starved Pakistanis wouldn't mind Indian Oil!

This disaster can either strengthen or severely weaken Pakistan's fragile civilian government, also making Pakistanis even more sceptical or hostile, as 20 million survival stories resurface. No one can predict anything, as the only thing obvious is that nothing good will happen to Pakistan and the war against terrorism — unless global aid comes to salvage the sunken state of Pakistan.

Saad Sarfraz Sheikh is a journalist based in Lahore. He can be reached at: saadsarfrazsheikh@gmail.com


First published in The Hindu: http://www.thehindu.com/arts/magazine/article806738.ece