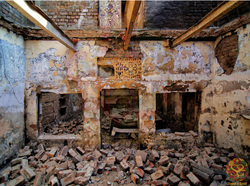 On 9th March, 2013, I saw an entire neighborhood burn right in front of my eyes. All I could do was watch, as the houses fell and their residents watched in vain.

And now, there are burnt teddy bears and dolls, broken doors and melted buckets stuck on the floor. It seems I am on fire.

Nasreen’s defunct washing machine is now as black as the night. Her child sits on it and weeps. Like a surgeon, she salvages the motor and tells me that it could still work. But her microwave, she tells me, is a painful puddle on the floor.

In the house next door, Naseem Bibi runs around, showing what’s left to me. There is nothing to show, everything is an ugly BBQ. Nasreen’s husband and I climb the stairs for the first time after their house was burnt. Their daughter’s dowry was stocked upstairs. We discover empty safes and brand new but broken furniture. They are devastated on the discovery of their loss. Their houses have been stripped clean of every belonging they ever had. The mob left nothing behind. The wallets are missing.

Those burning their houses had ample time, as they broke the locks and robbed people.

All houses burnt, except one which said “this house belongs to a Muslim, don’t damage it please”.

The kids have been stripped of their innocence and I now see fear in their eyes. 8 yr old Ilyas Masih wants to stay inside a dustbin, as he feels safer. “They won’t come here, they won’t burn a dustbin.”

While his younger brother Noman sits on a fire truck’s bumper excitedly, exclaiming “they’re here to save my house”

These people are the poorest of the poor. Municipality workers who brave the night, collecting garbage from the city. Sweepers who clean and unclog sewers. And now the mob burnt their houses, assets they had struggled to collect over the decades.

An old woman wobbles through the narrow street. “My house is still on fire”, she says. “The sky is falling. There is no God. If there is one, he’s looking the other way.”

As dusk falls, a student grabs me by the arm and tells me, “We are the toilet paper of the nation. We…”

He is interrupted by a woman who walks through the darkness, asking if we’ve seen her daughter.

As I stand outside a destroyed church, men scoop burnt bibles from the knee-deep water accumulated after the fire brigade hosed the entire neighborhood. A man shoves a burnt cross into my face, as his brother, a traumatic man, keeps repeating, “Terrorists were here in our neighborhood. We were attacked.”

Right outside the neighborhood, Reverend Riaz Malik, a priest actively engaged in spiritual and physical rehabilitation, takes no time in assembling the people for a quick yet soothing prayer.

A flurry of senior police and government officials land and leave like migratory birds at the site. Self-flagellating women take to the streets, their wails haunting, yet unheard.

The angry mob that attacked Joseph Colony burnt 180 houses. They robbed the houses and burnt everything, as the residents watched helplessly from a distance. The extent of material and emotional damage can never be repaired or reimbursed.

(Saad Sarfraz Sheikh is an independent journalist, photographer and musician based in Lahore. Twitter: @saadsarfraz.)