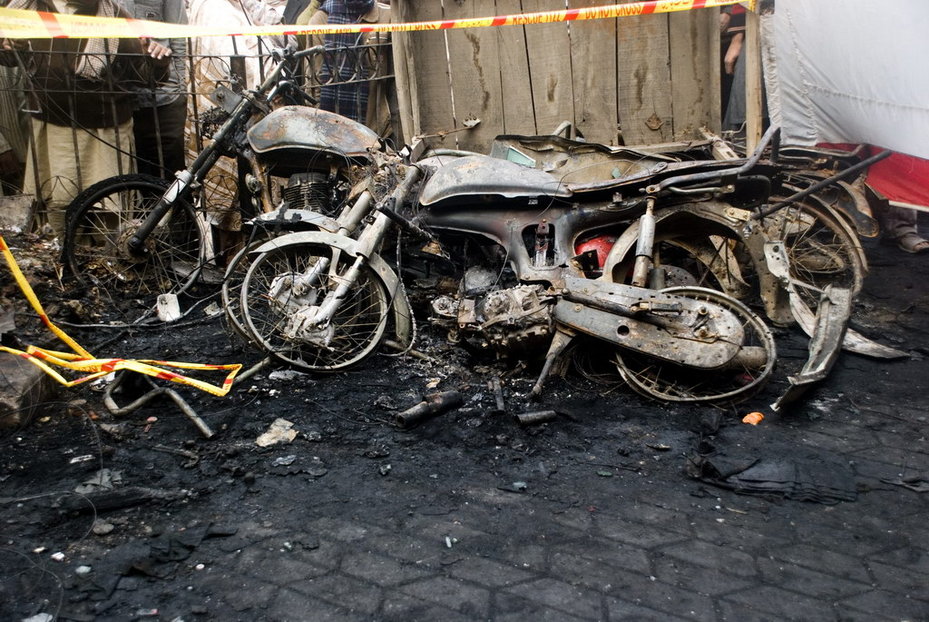 LAHORE: The death tally of Lahore twin blasts has mounted to 49 while another 180 persons sustained injuries including some in critical condition, according to Lahore District Coordination Officer (DCO) Sajjad Bhutta.
Debris from the Lahore twin blasts, which killed 49 while another 180 persons sustained injuries including some in critical condition. Lahore, Pakistan. 8/12/2009.
According to sources, two consecutive blasts ripped through Lahore’s commercial center late on Monday night.
According to sources, the first blast was a suicide attack while the second was detonated through remote control device. However, the district administration said that both the blasts were result of suicide bombing and that the heads of both the bombers have been recovered from the site of the incident.
The Edhi Welfare Trust sources have put the death toll at 49. On the other hand, CCPO Lahore Pervez Rathor has confirmed deaths of 37 people in both the attacks. The number of injured is over 180, he added.
Initially, the Rescue Operation Director General said that 38 people died in the incident while 90 others were injured.
Those hurt also included women and children.
The two blasts occurred within seconds of each other at Lahore’s busy Moon Market in Allama Iqbal Town locality here. The first blast took place in the middle of the market while the second one near a private bank.
Fire erupted in the market immediately after the blasts, engulfing a number of shops and motorcycles parked in the nearby parking space.
The powerful blasts also shattered the windowpanes of the surrounding buildings.
Rescue efforts were immediately got underway after the blasts and the bodies and injured persons were started to be rushed in 1122 ambulances to nearby hospitals where emergency had been declared shortly after the tragic incident.
Some of the injured persons are said to be critical in condition.
Moon market is a commercial center of Iqbal Town, Lahore, where shoppers are normally present in large numbers. A suicide attack had also been launched at a police station in this area on 13 August last year in which 8 people lost their lives.