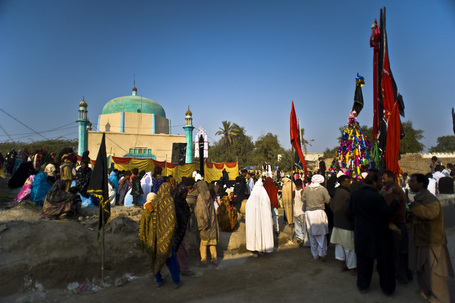 The Mourning of Muharram is an important period of mourning in Shia Islam, taking place in Muharram which is the first month of the Islamic calendar. It is also called the Remembrance of Muharram (Arabic: ذكرى محرم or مناسبة محرم‎). Many of the events associated with the remembrance take place in congregation halls known as Hussainia.
The event marks the anniversary of the Battle of Karbala when Imam Hussain ibn Ali, the grandson of the Islamic prophet Muhammad (PBUH), and a Shia Imam, was killed by the forces of the second Umayad caliph Yazid I. The event is marked by arranging 'majalis' (gatherings) to review Islamic teachings and to commemorate Imam Hussain's sacrifice. The mourning reaches its climax on the ninth and tenth day.Male and female participants congregate in public for ceremonial chest beating (matam) as a display of their devotion to Imam Husayn (AS) and in remembrance of his suffering. In Shi'a societies, (Bahrain, Pakistan, India, Afghanistan and Iraq), male participants, as seen in the following photos, incorporate knives or razors swung upon chains into their matam.