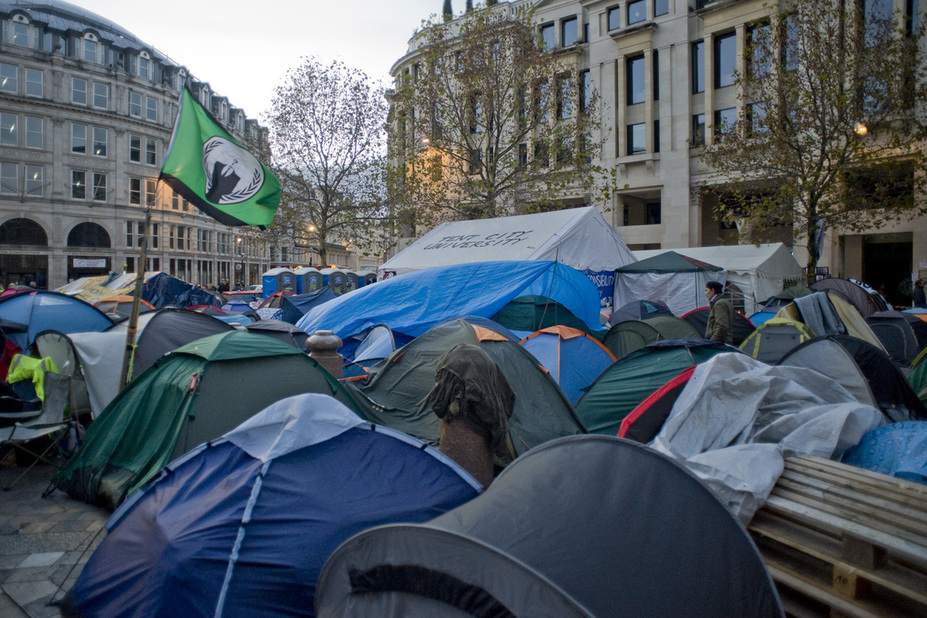 It is the meme that launched a thousand camps. The protests in Wall Street, London and Oakland may be its flagships, but the Occupy movement is a global one, stretching across six continents, more than 60 countries, and sparking up to 2,600 demonstrations. There have been 10 camps in Britain alone.
It is hard to say who started it. Occupy Wall Street, which began in September, was the first to popularise the term. But #OWS was itself predated by camps in Madrid, Athens, Santiago – and even Malaysia. The day most Occupy camps got going – 15 October – was first proposed because it marked the five-month anniversary of the Spanish occupation.
What unites them? A common rage at economic and social injustice and the feeling that "the 99%" are being shafted by society's richest 1%. But each protest has been different. Some were no more than rallies, and their demands differed from protest to protest – if they existed at all. Many protesters propose tweaks to capitalism – a Robin Hood tax, perhaps. Others want wholesale systemic change. Often, anger has a local twist. At St Paul's Cathedral, occupiers have precise demands for the City of London. In Chile, they attacked university fees; in Spain, youth unemployment.
In almost all cases, though, the camps themselves are a kind of demand – and a solution: the stab at an alternative society that at least aims to operate without hierarchy, and with full, participatory democracy.

London:
Immediately evicted from their first target, the London Stock Exchange, Occupy London settled a few feet away on the steps of St Paul's Cathedral. They were initially welcomed by the church hierarchy – but after a drop in cathedral revenue, the camp was asked to disband. This prompted the resignation of both Canon Giles Fraser, who supported the protesters, and the dean, who was felt to have mismanaged the situation. Criticised for harming the church more than the City, the occupiers then released a set of demands for financial and legal reform in the Corporation of London. Along the way, they expanded to a second site in Finsbury Square, and began squatting a building owned by financial services company UBS.

According to the Guardian,

The Occupy London movement has cost the City of London Corporation nearly £500,000 since it took root in the Square Mile six weeks ago.

The corporation, which is taking legal action to remove the Occupy camp from the area around St Paul's Cathedral, has spent £450,000 on policing, £15,000 on cleaning and has budgeted £200,000 for legal fees. The money is coming out of the corporation's public purse.

The activists, who are campaigning for economic and social justice, have three bases, one of which is on corporation land. Of the others, Finsbury Square is on land owned by Islington council while the third is non-residential and operates from a vacant bank building near Liverpool Street.

On Wednesday the corporation served the St Paul's camp with an enforcement notice as part of its efforts to remove the hundreds of tents pitched since 16 October. It appears to have caught Occupy London by surprise, as many of its members were taking part in the national protests against public sector pension reform.

The enforcement notice says the camp is not "an appropriate use of land".

"It adversely affects the setting of the cathedral and other listed buildings and does not preserve or enhance the character and appearance of the St Paul's conservation area. It has a significant adverse affect on the general amenity of the area. It adversely impacts other uses in the locality including worshippers and businesses."

Protesters will have 48 hours to comply with the notice, which takes effect on 30 December unless an appeal is made beforehand.

The eviction hearing will takes place at the high court on 19 December.

In the meantime, OccupyLondon has called for an end to tax havens, for lobbying transparency and personal accountability for executives.

As Chancellor George Osborne prepares to set out his Autumn Statement, Occupy London issued a call for an end to tax havens and schemes that enable the wealthiest in our society to avoid paying their fair share of tax.

It also called for full transparency in corporate lobbying, to be enforced by an independent regulator, and for a change to the current system of corporate accountability that would make decision-makers personally responsible for their actions.

Published as part of Occupy London’s Corporations Policy Working Group’s initial statement, these remedies are intended to begin to address the challenges facing the world Occupy London sees as unfairly dominated by large businesses which wield wholly disproportionate influence, and where politics and the corporate world are “intertwined”.

The third policy statement endorsed by Occupy London – in occupation at St Pauls since 15 October, Finsbury Square since 26 October, and which on 18 November in an act of “public repossession” turned investment bank UBS’s abandoned offices on Sun Street into a Bank of Ideas – its ratification signifies the beginning of the UK Occupy movement putting forward structural alternatives to the present system. The move also follows its initial statement of 16 October and recent publication of its first statement of its City of London Policy Group. [1] [2]

“From the moment the Occupy London Stock Exchange occupation started, in the full glare of the media and in the court of public opinion, we have continually been asked what do you want? What are your demands?” commented Jamie Kelsey, supporter of Occupy London and a member of its Corporations Policy Group.

“For us, the first stage has been a focus on creating a space for dialogue – both physically and politically – bringing people together to educate each other, raise awareness of critical inequalities and to begin examining potential alternatives to the current system – both in terms of incremental changes, as well as the more radical.

“What you are now seeing is the beginning of the next stage with the publication of Occupy London’s policies which detail what we want. We are calling time on a system where corporates and their employees pursue profit at all costs. Just as corporates have played their role in the iniquities of the current system, they are also part of the solution and we invite them to join this important conversation. It is time for a more just society for the benefit of the many, rather than the few, and we together can make that happen.”

The statement was passed by the Occupy London’s Stock Exchange camp (OccupyLSX) at St Paul’s Churchyard as part of its General Assembly on Friday. This was the second time the proposal had been brought before the Assembly: on its first appearance before the GA, the statement was blocked by two supporters of OccupyLSX, who then joined the working group to help produce the second draft.

This is the first policy statement of many from the Corporations group detailing steps forward – expect more in the coming months.

Initial statement of the Corporations Working Group, as passed by the OccupyLSX General Assembly on 25th November

With its relentless pursuit of profit at all cost, the present corporate system fits the definition of a psychopath, driving the rapid destruction of our society and the natural environment. [4]

This is done only to benefit a small minority and not the needs of the 99 per cent. The way corporations and governments are intertwined fundamentally undermines democracy. Corporations are rarely transparent or accountable to the people. This corporate system is broken and we call on the people to reclaim their power and bring about a radical and immediate change.

We propose these following points as first steps towards this:

Corporate lobbying subverts our democracy. Last year corporations spent £2 billion influencing the British government. We believe exploitative corporate lobbying has no place in a democratic society. Legislation to ensure full and public transparency of all corporate lobbying activities must be put in place. This should be overseen by a credible and independent body, directly accountable to the people.

The existing system of corporate sanctions allows executives and board members to avoid individual responsibility for the consequences of their actions and inactions. Those directly involved in the decision-making process must be held personally liable for their role in the misdeeds of their corporations and duly charged for all criminal behaviour.

A welcome development at Occupy London is that many people working within these corporations have communicated support for our concerns. We encourage anyone to come forward and offer their opinions, or any relevant information, either openly or confidentially, to add to this discussion.

We recognise that corporate employees may feel like they do not have the power alone to create change, but by welcoming them into talks with Occupy London and working together, we can create a socially responsible and sustainable economic system.” Courtesy OLSX