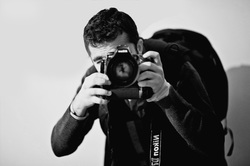 I, Saad Sarfraz Sheikh, am a writer and photojournalist based in Lahore, Pakistan. I have written extensively for newspapers and magazines in Pakistan and abroad.
I began my news-editing career with Daily Times as a sub-editor (2005-2009), and then joined the The Friday Times (2009-2011) as the assistant editor.
I completed an MA in Global Journalism from the University of Sheffield in 2011 and an MPhil in Public Policy and Governance from FCCU in 2014.
I work as an independent photojournalist and freelance for different news agencies like Corbis, Getty Images and Demotix.

My photos on Getty Images
http://www.gettyimages.com/Search/Search.aspx?asset&family=creative&artist=Saad+Sarfraz+Sheikh

Corbis Images features the best of my work on their website:
http://www.corbisimages.com/Search#pg=saad+sarfraz+sheikh&p=1&sort=2