The old man and the trolley... 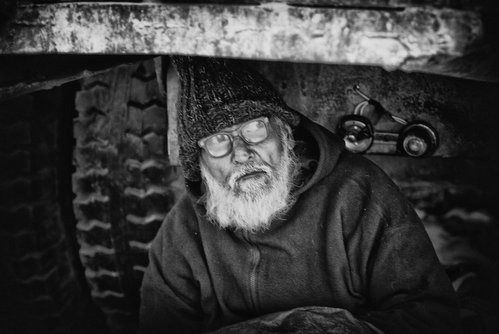 A mid the harsh winter rains of Lahore, Muhammad Hussein silently mumbles through the cracked glasses that sit on his nose.
While he shelters himself under a tractor-trolley, I photograph his misery from a safe distance, thinking he doesn’t know. He calls me out from a distance, “Son, when you’re done, do see me before you leave.”
I realize that he’s a beggar and expects money for his “shoot”. Once done, I walk over to him and crouch near his “abode.”
As he tells me his story, I see that his every sentence begins very much like his life, abrupt yet conclusive, punctuated by harsh hesitations, grammatically embraced by vague semantics.
At the age of 84, he has been living under this tractor trolley for the last 13 years. He tells me that he doesn’t beg and lives on whatever people around him offer him. He is one of the many 0.2 million homeless people in Lahore and doesn't know where his family is.
Lahore, like most developing Asian countries has cities full of homeless people sleeping on footpaths, under dark tunnels and bridges, anywhere they can get shelter from the sun.
Hussein’s life revolves around his little fort made of seven bricks that change formation to be a bed, a dining table, a pillow and an eventual shelter… His Stonehenge has no historical importance, nor does his life. He is one of the forgotten few.
Back in his days of glory, he used to be a postmaster. After his retirement, he joined his family of carpet weavers. After ten years of intense labour, Hussein’s eyesight started weakening and his family kicked him out.
In a country as eventful as Pakistan, it is a typical act to ask people what they think of the state of affairs. I am no exception, and I ask him to give his 2 cents.
He heaves a sigh and explains how decades ago, he, along with millions of others, dreamt of a homeland they could call their own, a land they could walk upon, a sky they could live under. He regrets how his innocent dream metamorphosed into an eternal nightmare, plagued by feudals and corrupt generals who wanted to own more than the land itself.
I expect him to be a harsh critic, but he surprises me with a very important lesson. He relates that during the 70s, he used to work at a Palestinian businessman’s house in Saudi Arabia. The Palestinian was filthy rich and boasted how his vaults were full to the brim. The Palestinian would raise his carpets and show countless Saudi Riyals lying under it. Muhammad Hussein admitted that he was impressed and convinced that the Palestinian was very rich, but didn’t see the motive behind his display of wealth.
The Palestinian carried on, “I have all this wealth, yet you are still richer than me, for whenever you die, you will be buried in your own soil. I, on the other hand, will be buried in foreign soil, for I have no land to call my own. You are very lucky to be blessed with a sense of belonging, while I have none. Even all the wealth in the world cannot buy me that.”
As ancient diesel trickled down Muhammad Hussein’s face, he emphasised that “as long as we have this country, nothing can go bad. He said that all those sacrifices shouldn’t be wasted and we need fix the nation and not loose hope”.
It was interesting to listen about the “sense of belonging” from a man who had been living under tractor-trolley since the last thirteen years, as it spilled its many bounties on him. Muhammad Hussein’s life revolved around a set of seven bricks, but his words echoed the seven skies that day. He certainly changed my life, but his hasn’t changed much. I pass by his ‘house’ everyday, he’s still there under the tractor, giving us a chance to be inspired.